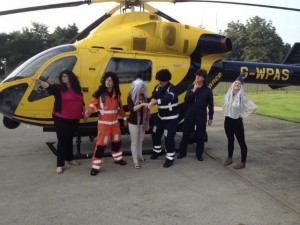 There are eighteen air ambulances operating nationally, all of them charities.The purpose of the National Air Ambulance Week each year is to promote these charities and raise awareness.

Here in Wiltshire there are many people using innovative ways to raise money for this eminently good cause, doing things as diverse as baking cakes to running marathons. The Air Ambulance staff themselves held a ‘Wig Wednesday’ striking some interesting poses in the photograph on the left. Eighteen trekkers crossed Morocco to ascend the highest mountain as well as others taking part in a sponsored skydive.

Wiltshire’s Air Ambulance is unique; it’s the only Air Ambulance charity in the country that shares its aircraft with the police. At the moment the charity pays a third of the running costs, however the government has decided to centralise all police aircraft which means here in Wiltshire the charity will now have to fund the full running costs of the aircraft. In order to ensure Wiltshire keeps its vital and much loved lifesaving Air Ambulance, the charity must raise £6800 a day (£2.5 million a year) as at the end of 2014 the contract with the police will come to an end. The charity are hopeful the collaboration will continue, however they are now upping their fundraising to make sure Wiltshire does not lose the Air Ambulance.

The Air Ambulance Lottery raises a sizeable contribution helping to keep the charity on track to achieve the above figure.

Educated at a local grammar school, before attending college in London and working on various projects in the Middle and Far East. Founded Carlton Business Centre in 1992 using the ethos that it should be easy for businesses to make the move to a business centre in an as user friendly way as possible. Having run a number of his own companies he is well aware of the requirements of potential and existing tenants. Alistair has a son who works in London and a daughter who lives and works in Dubai. He has two grandchildren. He has an interest in two further businesses, as well as keeping fit and participating in a number of different sports.

“I have been delighted with the office space that we have taken up at Carlton House. The atmosphere is warm and friendly, the all-inclusive services are to a very high standard and they could not ha… END_OF_DOCUMENT_TOKEN_TO_BE_REPLACED

“Nice people and a great place to start and build a business from.” Kevin Marsh | ComPay UK

“Skylar (UK) Ltd has been a licensee at Carlton House for over a year and is important to us in terms of location and quality of facilities. It offers us good and clean accommodation and excellent fac… END_OF_DOCUMENT_TOKEN_TO_BE_REPLACED

“When Costas and I joined to set up Akula Global in September 2012, we were faced with two choices – either commute weekly to Yorkshire, or work from home. Neither was a particularly enticing prospect… END_OF_DOCUMENT_TOKEN_TO_BE_REPLACED

“UCcert chose the Carlton Business Centre due to its flexible in/out terms plus the added benefit of allowing us to change offices within the building as the company grew.  With The Carlton Business … END_OF_DOCUMENT_TOKEN_TO_BE_REPLACED

“I recently rented an office at The Carlton Business Centre in Calne and could not have been happier with the service received or the standard of the offices for the rent I paid. They are always clean… END_OF_DOCUMENT_TOKEN_TO_BE_REPLACED

“A big thank you to all at the Carlton Business Centre for providing a flexible, professional and friendly service. It’s rather daunting moving into your first office but the guys made me feel very we… END_OF_DOCUMENT_TOKEN_TO_BE_REPLACED

“We initially moved into Carlton Business Centre to use it as a remote office in Calne. In the time we’ve been there we’ve been able to upgrade internally 3 times, each time to a larger office! Th… END_OF_DOCUMENT_TOKEN_TO_BE_REPLACED

“I was looking for a local office that was easy to move into, represented good value for money, had great facilities and had easy access to the M4 and main railway station. This proved to be quite … END_OF_DOCUMENT_TOKEN_TO_BE_REPLACED